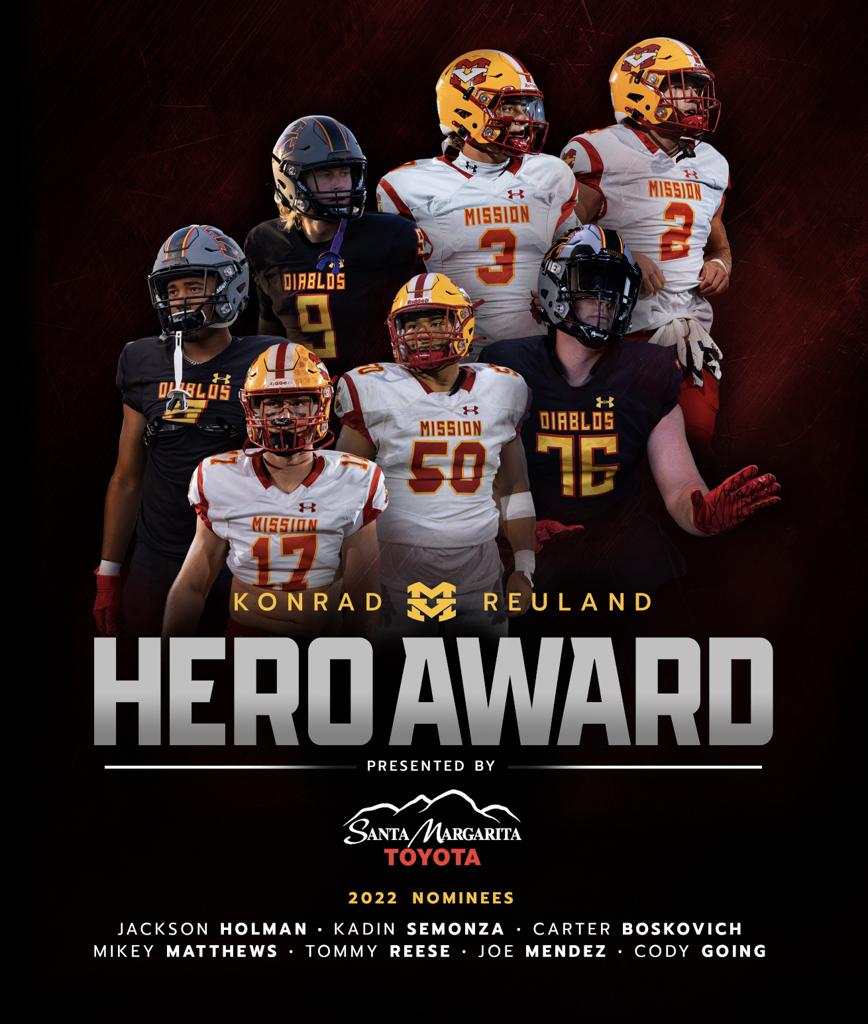 Konrad Reuland was an outstanding player and teammate for Mission Football from 2004 - 2006 helping to lead the Diablos to 39-2 record during that time. Reuland later went on to play for the University of Notre Dame and Stanford University. As an undrafted free-agent, Reuland played professional football for the 49ers, Colts, Ravens, and even rejoined his High School teammate and friend, Mark Sanchez, on the Jets. Reuland was known for his compassion, sacrifice and service in the community. On December 12, 2016, Reuland died from a brain aneurysm.

And as well as he was on the field, he was a better man off the field. Konrad was known in the community for his service and sacrifice. Even in his tragic and unfortunate death, he served others with life. He donated his organs to save the lives of three individuals including Baseball Hall of Fame player Rod Carew, who received his heart and kidney.

So in memory and honor of this great man, we’ve created the Konrad Reuland Hero Award presented by Santa Margarita Toyota. This award rewards character on and off the field. The Hero Award recognizes Integrity, Generosity, and Service to others.  This year, 7 young men were selected by coaches and the board of directors to represent the strong character that is pervasive on this team. The winner will be voted on by you, the fans!

The recipient of this prestigious award will receive a $1,500 scholarship towards college.

Carter Boskovich
Carter was selected by his peers to be one of four captains on this star-studded squad... which speaks to his leadership. But what most do not know is his impeccable commitment serving those who have extraordinary life challenges. Carter volunteers for the Special Olympics, National Charity League, and Waves of Impact in which he has taught sick, underprivileged kids and their siblings how to surf. Carter finds joy in helping individuals with disabilities and disadvantages restore their confidence and experience joy with the thrill of riding a wave! On the field, Carter is the consummate teammate! Not only does he set the example of how to be a leader, he also looks for ways to impact the lives of those around him. An example of this was displayed in his Junior season when his Senior teammate didn’t have game pants to play in his last Senior Night game. Without hesitation, Carter took off his game pants and gave them to his teammate. This small gesture made a lasting impact and is the type of sacrifice worthy of this award.

Cody Going
The path to describing the character of Cody is paved with all the right cliches that describe an Offensive Linemen. A protector of the innocent, a force to reckon with, a beast on the field, and a teddy bear off. Who said you can’t have brain and brawn?! Cody has the highest GPA on the team and is a member of the California Scholarship Federation, volunteering for peer tutoring. He leads fundraising efforts for his school’s AG programs and has zero tolerance for any form of bullying. On the team, he mentors young players and goes out of his way to help his teammates, even if that is serving them water when he is injured. Cody is very active in his Church, and his faith is essential to him. When a close friend was in a serious car accident, Cody helped organized a fundraiser for support and regular in-person visits so he wouldn’t be alone in the hospital for 90 days. Cody leads with actions not just words. Whether you are a classmate with special needs that he walks to class or a young lady on the receiving end of his chivalry, Cody is a hero to many.

Jackson Holman
Quiet, Selfless, and Humble are just some of the words used to describe this 6’3” Arizona University-commit phenom. Jackson boast one of the highest GPAs on the team, but boasting is the last thing Jackson will do. When others might lead loudly with platforms, Jackson leads quietly with poise. Whether at home, on the field, or in the community, Jackson is always the first to lend a hand. He has a compassionate eye for people around him that might be struggling, down, or in need. Jackson is not only one of the best wide receivers in the states; he is one of the biggest heroes in the community. Jackson dedicates time to serving with youth football leagues and outreach programs in local schools throughout Mission Viejo, like a true hero.

Mikey Matthews
On the field, Mikey is a 3-star athlete, Under Armor All-American, and league MVP. Off the field, Mikey is a young man with a consummate character. Mikey was born with a servant’s heart. He has always put others before himself. You would never know how fierce a competitor he is by the way he befriends and helps up his opponents. Mikey is the ultimate teammate; whatever he has, he’s willing to share. He is always looking for ways to serve those who are in need, include those that feel marginalized, and encourage those that need it most. Mikey is active in the community mentoring kids and coaching youth football. He realizes that he didn’t achieve his dreams alone, therefore he looks for opportunities to bless others, the way he has been blessed. Mikey truly loves God and loves others, and worthy of your vote.

Joseph Mendez
Joe is an undersized Nose Tackle that stands at 5’8” and weighs in at 225 lbs, yet he’s the team’s strongest player and is the heart and soul of this Diablos team. His “David” demeanor and “Goliath” heart makes him the ideal servant-leader on the sidelines, going out of his way to help and include his teammates at any cost. When Joe speaks, players listen. He expects everyone around him to work hard and be their best, because he demands this of himself first. The 2022 Great American Rivalry Series Scholar Athlete recipient is not only a winner in the classroom, but also a winner in the community, known for serving, coaching and mentoring young athletes. Joe is a true hero!

Tommy Reese
Tommy’s quiet confidence anchors his influence as a leader on and off the field. He plays Middle Linebacker on the field with intelligence and veracity second to no one. Off the field, he plays big brother with a passion and reputation for developing, encouraging, and mentoring younger players finding their way on the team. This devotion to development is what drives Tommy to work with kids at youth camps, coaching flag football leagues, and visiting middle schools. Tommy models the essence of this award in his daily life and is worthy of your vote.

Kadin Semonza
Kadin is a three-year starter as QB1 for the Mission Viejo Diablos. Yet this is his least impressive attribute when taking a closer look. Kadin is a 4.0 student, a 3-star athlete, with a 24-karat heart. For the last few years, Kadin has given his time coaching at his former youth football programs, flag football leagues, and youth camps. His community service didn’t stop there; he volunteers at local food banks, where he helps pack food for families in need. If you know Kadin, you know he is worthy of your vote. He’s a polite and respectful young man committed to making a difference in this world!

Thank you to our premier partner, Santa Margarita Toyota for partnering with this vision to award character in our community.